When it comes to densifying airline cabins, give most carriers half an inch and they’re happy to take a mile. Yet for the best part of a century, commercial aircraft passenger seats have been secured to a track in the cabin floor with fittings separated in full-inch increments. Now, at a time when airlines are eking out minuscule amounts of space to add density to their aircraft, a small German company, Bishop GmbH, is proposing a fitting that allows airlines to adjust the pitch of seats and monuments in half-inch increments.

The Bishop fitting remains in the same seat tracks, but is shaped to allow seats to be secured at both 1” and 0.5” offsets, allowing both more flexible configurations and more precise layouts.

“I was the stress engineer who originally dimensioned the A320 seat rail on the A320 airliner,” Bishop told RGN. “The seat rails have not really changed since 1930. The seats are installed in lugs, which are these little circular lids, which have a pitch of 1 inch — exactly one inch. But the question I asked myself is: why one inch? And an idea came to us: let’s be clever, what about half an inch? With half an inch, in comparison to the one inch, it gets you double the accuracy when you want to put your seats, monuments, and galleys in. You can do half an inch accuracy, rather than one inch. You can basically rob the passenger in front of you a little amount of space and in the length of the aircraft you can get one extra seat row in without anyone really noticing.”

In extensive conversations with Runway Girl Network, Bishop suggested that the move would allow airlines to add a row of seats in an older layout Airbus A320, as well as equalising pitch across the cabin.

Layout of passenger accommodation (LOPA) diagrams Bishop provided to RGN show an A320 cabin that feels a decade old: four rows of 31” pitch up front, then three rows of 30”, three of 29”, the two exit rows, and then 15 rows of 31” behind the emergency exits. None of the major European A320 operators currently offer quite so spacious a cabin. Most are hitting either 30” throughout or 31-32” in the potentially Eurobusiness zone and 29” behind the wing. 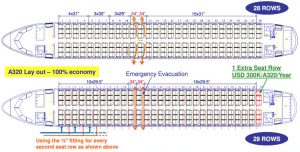 Bishop also suggested that the increased granularity of the half-inch fitting means an improved emergency egress path at the overwing exits. With regulators content to certify existing egress paths at a 34” pitch, however, there is unlikely to be any benefit unless the fitting enables a tighter pitch for egress, which seems dubious. It’s also uncertain whether there is significant airline appetite to press the relevant authorities for such a change.

The issue with the product, though, may be one of demand. Much of the low-hanging fruit of narrowbody densification has already been plucked.

The Airbus Space-Flex combined galley-lav monument also reduces some of the demand. Airlines that have already squeezed in extra rows thanks to the replacement of the previous two in-track lavatories may not find a further densification effort cost-effective from purely a point of view of taking aircraft out of service.

Certification of the fitting in the cabin is another cost area, with likely costs stretching into the high tens of thousands of dollars. The actual fitting is relatively inexpensive, however, Bishop said, suggesting a standard layout costs approximately €850, while replacing half of the fittings with Bishop’s half-inch version is likely to cost around €1044.

At this stage in the narrowbody airliner densification game worldwide, the proposed benefits do not appear striking enough to immediately demand full-fleet refits. Yet it would be unsurprising to see the product included in a wider set of cabin reconfigurations, or to be specified by an airline as part of a refleeting effort. 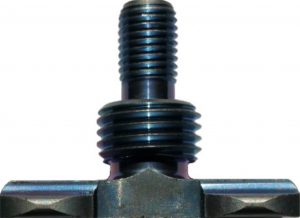