Here’s a love story at the smallest scales imaginable: particles of light. It is possible to have particles that are so intimately linked that a change to one affects the other, even when they are separated at a distance.

This idea, called “entanglement,” is part of the branch of physics called quantum mechanics, a description of the way the world works at the level of atoms and particles that are even smaller. Quantum mechanics says that at these very tiny scales, some properties of particles are based entirely on probability. In other words, nothing is certain until it happens. 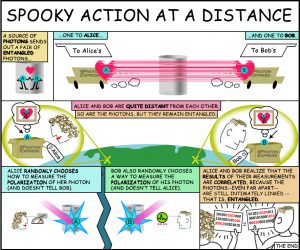