The 17th July marked the 20th Anniversary of the Bishop GmbH – Aeronautical Engineers based in Hamburg. The company has each year been and maintained profitability, and at the same time has invested in property and innovations. So what was the seed of the company ? Although the founder was alone Peter Bishop who founded the company in 1997, the roots in Aeronautics may well have been sown during the dark days of WWII in South England. His Father William George Frederick Bishop at 14 was obliged to work in the aircraft industry. His company was involved in manufacturing parts for military gliders. Sadley George died on 28. November 2016, a photograph has been recently unearthed of a young and handsome Bishop, probably taken in 1943 being presented to Great Britain Queen Mary. Queen Mary in herself was a remarkable person, and some of the positive attributes of the present Queen Elizabeth were greatly influenced and honed by Queen Mary. See https://en.wikipedia.org/wiki/Mary_of_Teck Although George was more artistically inclined, his second oldest son Peter Bishop amply filled this vacuum with interest in the local defunct Miles Aircraft factory, and an interest in aeromodelling. At the same time, Peter Bishop was able to accompany the Apollo Space Program culminating in “man-on-the-moon”, Concorde and the Space Shuttle. Today he runs Bishop GmbH, and owns and flies a fleet of vintage Miles Aircraft. It is little surprising that today, Peter Bishop recently flew the Lynx Rocket SpacePlane simulator at Mojave Airport in May 2017. 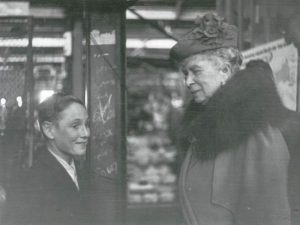 Picture taken in 1943 of George Bishop (youngest in the factory) being presented to Queen Mary in WWI.